Observing the heavens with a pair of binoculars is without a doubt the easiest and most cost-effective way to get into the hobby of stargazing, and you don’t need the biggest, heaviest, and most expensive model on the market to do it, either. Almost any binoculars will show you the heavens like you have never seen it before, even under urban skies, but we do recommend not using binoculars smaller than 7 × 50 if you want to observe the types of objects we have listed here to best effect.

Moreover, some of the objects on this list can even be seen without any optical aid, so why not go out with a pair of binoculars tonight and see if you can spot star clusters you thought you needed a telescope to see, perhaps starting with—

Although NGC 752 is rather sparsely populated, it is a conspicuous binocular object and may even approach naked-eye visibility under dark skies and excellent seeing conditions. Note though that while a small telescope may resolve up to about 60 stars, 7 × 50 binoculars will resolve considerably fewer, but the actual number of observable stars in the cluster will vary with seeing conditions, as well as with instrument quality.

The cluster is about 1.3 billion years old, which means that most, if not all the stars in the cluster are low mass stars in the red giant phase but at least one blue straggler, and several spectroscopic binary stars are also present.

This pretty pair of open clusters was likely known in prehistoric times, since Hipparcos used tables extant in his time to catalogue the pair in the year 130 BC.

Both clusters are members of the Perseus OB1 association, and are only a few hundred light years apart, which usually places them in the same field of view of most binoculars. Both clusters are conspicuous binocular targets, but can achieve naked-eye visibility under dark skies and good seeing conditions. The slightly blue tinge of clusters is due to the preponderance of hot blue stars in both clusters, although both clusters also hold a few orange stars, some of which are sub-giants.

This cluster was originally catalogued as a nebulous object by Giovanni Batista Hodierna (1597–1660), and it was only in 1910 that Eddington recognized it as an open cluster. Melotte catalogued the cluster in 1915.

Since the cluster is on the whole only between 50 and 70 million years old, it contains a high percentage of hot, massive blue stars with O and B spectral classifications, hence the cluster’s specification as an OB Association. Easily spotted in almost all binoculars, it can also achieve naked-eye visibility under dark skies. Look for the bright star Mirfak (Alpha Persei), the star being the brightest member of the cluster.

Located only 150 or so light years away, the Hyades is the closest open cluster to Earth, which makes it an easy matter to derive their common proper motion towards a point just to the eastward of the giant star Betelgeuse in Orion at a recessionary speed of roughly 43 km/sec. Note though that the brightest star in the cluster, Aldebaran (Alpha Tauri), is not a member of the cluster, since it is closer to Earth by a factor of 2.5, placing it about 60 light years from Earth.

The cluster is widely dispersed; the group of stars forming the core spans across about 10 light years, while the outlying members stretch across a distance of about 80 light years.

Spanning across about 130 light years, the reddish hue of the nebula derives from the radiation of numerous young stars in the nebula’s heart exciting the constituent atoms in the nebula to the point where secondary radiation is emitted.

Apart from the visible stars in the core of the nebula, designated NGC 2244, the nebula also contains about 2,500 young stars that all contribute the nebula’s glow. Of particular interest is the central bubble in the nebula, which had been carved out by radiation pressure from two massive O-type stars, designated HD46223, and HD 46150. All told, the nebula weighs about as much as 10,000 Suns.

The nebula shown here and the open cluster it contains are for the most part treated as a single object, and although medium to large telescopes will usually reveal some of the nebula’s detail, binoculars will generally only reveal the star cluster from urban areas.

Also informally known as Caroline’s Cluster, this pretty little cluster was the first object Caroline Herschel had discovered independently of her brother, William Herschel. Her notes described the cluster thus; “A beautiful cluster of pretty compressed stars near 1/2 degree in diameter.” It was catalogued by William in 1786, although he did credit his sister as the discoverer.

As a matter of interest, the cluster contains four blue stragglers, which are stars that form either when two stars merge, or when one massive star pulls matter of a less massive star. The result is a star that is much hotter, bigger and massive than it should be for its age, which in the case of this cluster, is about 2.2 billion years. Look for this pretty cluster of stars about 3.5 degrees to the east of the bright star Gamma Canis Majoris, and a bit less than 1 degree to the north-west of the eclipsing binary star R Canis Majoris. 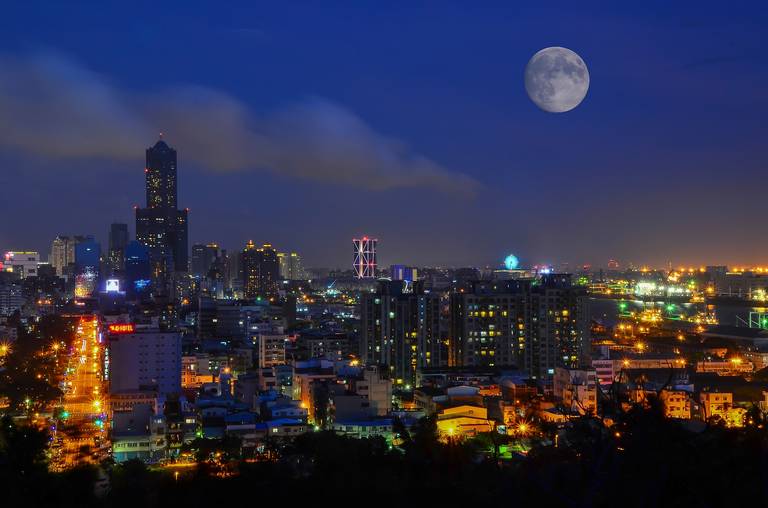 The Best Telescopes for Urban Astronomy